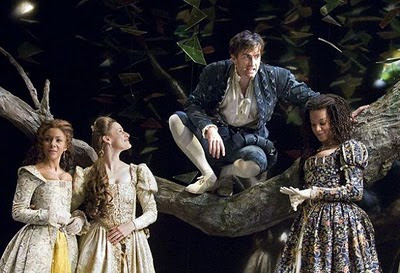 The David Tennant Treat 4 Today is a lovely quote about David from Mariah Gale. It appeared on BirminghamPost.net on 30th July 2010 (see here to read the whole article).

Mariah played Ophelia in Hamlet with David Tennant plus she was the Princess Of France in Love's Labour's Lost and was currently starring as Juliet in Romeo and Juliet.

The relevant part of the article is:

"Although she had won critical acclaim for earlier roles, it was the role of Hamlet’s lover that catapulted her into the media spotlight in 2008. The lead was taken by David Tennant, fresh from Doctor Who super-stardom.

Mariah knew Tennant had already been cast and admits to being on edge when she first met the former Time Lord.

“It was scary, but it becomes not scary very quickly because you start working together intensely. I have so much respect for him as an actor. He was very lovely to me and very respectful. It’s nice when you appreciate what you can each bring to the show. It was really sad when we finished. The whole cast got on really well.”

They went to a Covent Garden restaurant for a late dinner on the last night.

“David was there with his girlfriend. They kind of snuck off at the end of the night and everyone was like ‘I didn’t get to say goodbye to David.’

And then the waitress came over and we asked for the bill and she said, ‘No, it’s been paid.’ He’d snuck off because he’d paid for everyone. It was lovely.”"