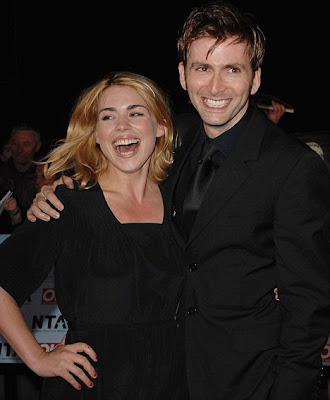 The David Tennant Treat 4 Today is a long, light-hearted interview with David Tennant and Billie Piper which was published in SFX magazine in 2006.

Many thanks to @Raffica for suggesting this David Tennant Treat 4 Today.

The first part of the interview is reproduced below with the remainder on another day so keep checking back!

DT: It's a nightmare. It's very, very difficult. Her flatulence is a big problem. [Laughs].

BP: Fortunately we get along. We all get along, and we need to, really, because it's long months and it's quite intense and we're shooting 13-hour days. You're thrown together all the time. I feel like I've made a friend for life.

DT: I hope so, yeah. It is weird, because we're the only two constants. Usually on a drama there's a bunch of you who go through the whole thing together, but... Noel and Camille come in and out.

BP: It's always nice to see them.

DT: It's always good to see them. But Billie's the only person I know I'm going to see every day.

BP: I see you more than I see my family, my boyfriend.

DT: That's fine. Just go with it. And luckily we get on and we've had a really good time.


THIS QUESTION'S FOR BILLIE. DID YOU LIKE PLAYING A POSH BAD GIRL IN NEW EARTH?

DT: You're going into Bad Girls to play a posh girl, aren't you?

BP: Do you think they'd want me? It was really fun. Actually, I was quite nervous because it was quite a departure from Rose and it was the first time in Doctor Who I'd played quite a lot of comedy, so I was quite scared. But also very excited. And I think it works OK. I like it. I think it's fun. I'd like to play many more... posh... bad girls.


DAVID, MY MUM AND MY BROTHER'S GIRLFRIEND, THINK YOU'RE REALLY SEXY...

HOW ARE YOU PLAYING TO THESE RADICALLY DIFFERENT DEMOGRAPHICS?

DT: With my knob out?

DT: I don't know how to answer that. I'm just doing my job really. It's not something that even if you were aware of there was anything you could do about it.

BP: I think they were there with Casanova. That's when their obsession started.

BP: I know that, actually, because my mum's on the phone all the time and that definitely started when she saw you in Casanova. Now she's just like, 'Are you sat next to him?' [Laughs].

BP: You don't think about it.

DT: How can you think about it? If you started playing to something like that, you'd immediately become unattractive to all these people who apparently find you attractive. It's a mystery to me, but I'm very, very proud of it.


DO YOU GET ANY ODD THINGS SENT TO YOU IN THE POST?

DT: Do you know, just the other day someone sent me a Tom Baker scarf. Full-length, knitted to perfection.

DT: The colours looked right to me as well.

BP: Well, you would know.

DT: I would know. Yeah, that was quite weird.

DT: Lovely! That someone sat down and did that!

BP: Yeah I know, it's special.

BP: We were filming in recently, and we got these little Dalek cakes from one of the residents in the street we were filming in. That was nice. Not full size, although I wish they had been because, frankly, they were amazing.

DT: Yeah. Mine was minty. Everyone was a slightly different flavour.


HAVE YOU HAD LADIES' KNICKERS?

BP: I've had some ladies' knickers in the post.

DT: I dream of ladies' knickers in the post.


MY MUM'S GOT SOME FOR YOU.

DT: Has she? Send them round. [Laughs]

BP: Mandy'll be knock-knock-knocking at that door to give them to you. It's fine… we love lowering the tone.