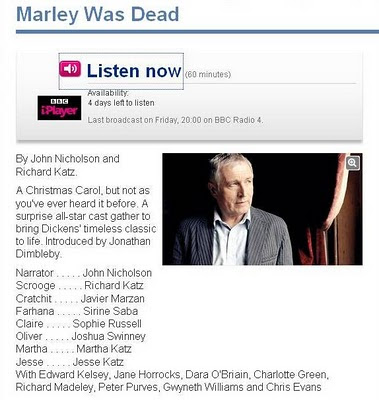 David Tennant's name was mentioned in relation to a spoof radio programme on Radio Two at 8pm on Christmas Eve.

"Charles Dickens's A Christmas Carol has been widely adapted and dramatised but never quite like this before.

An all-star cast gathers to bring the timeless allegory to life in Marley Was Dead, a piece of spoof radio. It is Christmas Eve and listeners are about to hear a starry cast performance of A Christmas Carol from St Martin in the Fields, introduced by Jonathan Dimbleby. At least, they think they are...

Jonathan Dimbleby, speaking from the balcony, introduces the production and the stellar cast: Sir Ian McKellen as Scrooge; Sir Patrick Stewart as the Narrator; David Tennant as Bob Cratchit and so forth. Sir Simon Rattle conducts. But a few seconds into the play itself - just after listeners hear the famous opening lines "Marley was dead", things take an unexpected turn for the worse. What follows next is screwball comedy in the finest tradition."

Although the press release said that David Tennant would be playing Bob Cratchit it continued that Javier Marzan was also playing the character so it was obviously a spoof but despite that several people tweeted it to us and one website even declared that David was involved in the programme!

The full hour long programme can be downloaded from this link for the next 4 days.