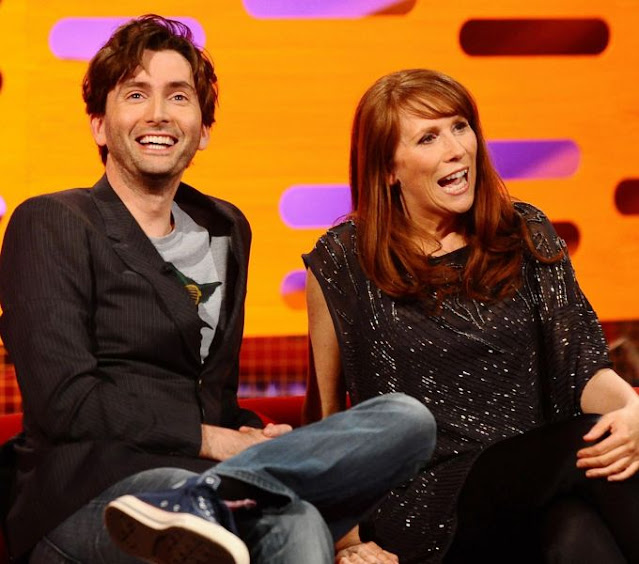 The David Tennant Treat 4 Today is something slightly different today as it's the BBC Press Office release for David Tennant and Catherine Tate's appearance on The Graham Norton Show in 2011.
David and Catherine's appearance was to promote their stage production of William Shakespeare's play Much Ado About Nothing in which they starred as Benedick and Beatrice and which was directed by Josie Rourke.

On the upcoming royal wedding, all the guests lament their lack of invites despite having brushes with royalty. Josh says: "Perhaps the invites haven't been sent yet. I would love to sing for their first dance."

Revealing her own love of the royal family Catherine says: "When I was little I honestly thought I was going to marry Prince Andrew. When I was at school he was really good looking and who knew he liked ginger people? If I'd known that I would have picketed. It was a sad day when Fergie bagged him.

Talking about Much Ado About Nothing, in which he stars with Catherine, David says:" It's the original romantic comedy, a proper comedy with witty dialogue. "Graham then delights in testing them on how well they know their lines just two weeks into rehearsals.

Talking about obsessive fans, Catherine reveals: "For four years I had an American fan that had a one-sided dialogue trying to get me to marry him. I didn't know anything about him because my agent wrote back to him and the reason she kept him from me was because he has a ponytail!"

David says: "I was once asked for my autograph in the shower on one of my rare visits to the gym. I was washing my hair, facing the wall, when I was tapped on the shoulder so already it's quite inappropriate. I turned round and there was another naked man standing there with a piece of paper. And I think 'if you can't see how inappropriate this is I am just going to have to play along' so I took the paper, which is slowly becoming mulch, and carved my name in it."

Josh says: "My fans are very polite  they don't scream. But there are a lot of pushy mothers who try and pawn their daughters off. It's a little bit awkward when you get the mother-daughter combo."

Jon talks about his new book, a guide to not having a relationship, and says about his stand-up tour: "It's generally about happiness and how hard it is to be happy when you want to be miserable to empathise with the world."

Josh performs Higher Window from his new album live in the studio. And finally, Graham pulls the lever on foolhardy members of the audience brave enough to sit in the red chair.

Notes to Editors
These quotes are taken verbatim from a studio recording and may not necessarily reflect the content of the final transmitted version of the programme.'
Posted by David Tennant On Twitter at 14:00