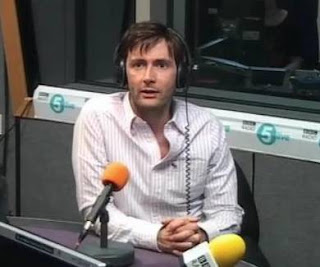 Continuing our look at David Tennant's career in 2012 as the David Tennant Treat 4 Today each day this week and today we are looking at his radio appearances.

In fact, compared to 2010 and 2011 David Tennant has been on the radio far less this year. This is mainly because he has had less to promote during 2012. Something which will certainly change at the beginning of 2013!

However, rather than having a MP3 of a part of one of David's interviews, the David Tennant Treat 4 Today is his hilarious version of the song Gold!

As Britain won so many gold medals in the London 2012 Olympics, Christian O'Connell planned to play the Spandau Ballet song for each gold medal or at least a version of their song.