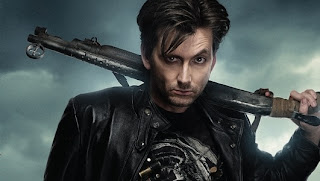 Continuing the theme of looking at different aspects of David Tennant's career during 2011 as the David Tennant Treat 4 Today this week, today it's the turn of Fright Night.

Of course David filmed Fright Night during 2010 but it was released during 2011.

The movie probably wasn't quite the success that the movie company hoped it would be but it did recoup its costs quite early on and 99% of the reviews spoke very favourably about David Tennant's portrayal as Peter Vincent. This must have been one of the hardest roles in the movie to attempt as Roddy McDowall made that character so famous in the original movie.

On a personal note, I was lucky enough to be invited to the Press Screening of the movie in Leicester Square a few weeks before it was released either here or in the US. Although it was nice to have seen it before most people, it was quite a flat screening as the people of Her Majesty's Press don't portray much emotion at this type of event. But I did hear several people praise David (and only David) as they left the screening. On the downside I spent about a third of the screening wondering why the soundtrack was so bad in the movie. I then realised that the sound I could hear was all the Press nosily eating the free popcorn we were given!

Here is the clip from Fright Night where Peter Vincent first meets Charlie. The clip is introduced by David Tennant!