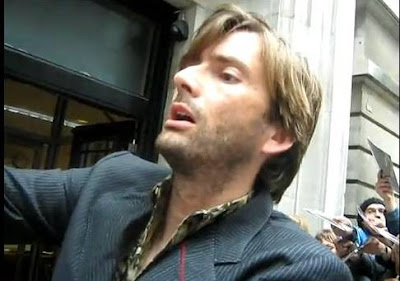 First of all, the answers to the David Tennant Treat 4 Today from yesterday:


1) Fires Of Pompeii
2) Doomsday
3) The Next Doctor
4) Gridlock
5) The End Of Time Part Two
The David Tennant Treat 4 Today is two videos which show David Tennant's arrival and departure from Radio Two on Saturday 9th October 2010. These videos have only been posted today and a couple of people have pointed them out so thanks to them.
At David's arrival, it appears that he was immediately surrounded by a group of eBayers (those people who get him to sign a lot of things to put on eBay to make a profit) so genuine fans could not get close to him but thankfully by the time he departed, the BBC had put up barriers to make it fairer and safer for everyone and you can hear the chat he has with lots of fans.