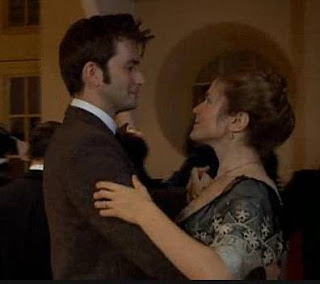 The David Tennant Treat 4 Today is an article which appeared in Scotland's Evening Times newspaper yesterday.

It is an interview with one of David Tennant's teachers:

"When Jacqui Wilson was a resident dance tutor at RSAMD in the early 1990s, she was barely older than her students. There was one in particular who stands out from her five years at the academy – a tall young man who had an interesting take on the request to bring a prop.

That student had a star potential that she’s tried to foster in the thousands of young dancers she’s coached in the last 22 years. 'David Tennant was fantastic,' recalls the 44-year-old.

'I do remember that at the dance exams you had to have a prop and he came in with a rose in his teeth and wearing a top hat.

“There have been lots of actors over the years who I taught dancing. Certainly David was a stand-out.